Those of you who are following this space know that something’s up, something even higher than the Empire State Building, which I did not visit during my two-month tour of the B-g A—e.  Neither did I seek out or frequent fancy restaurants there. On most days while I Airbnb’d in Manhattan, I had a modest and delicious soup-and-sandwich lunch at Gigi Cafe on W 71 Street,

where you will meet sweet & friendly gals like these two. 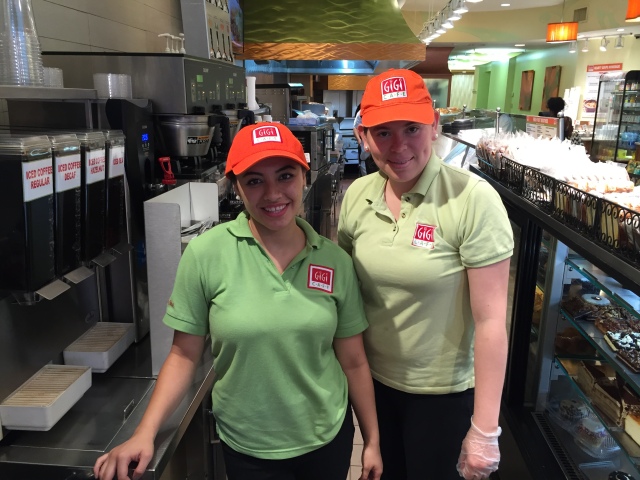 At lunch there one day I spied a young boy and his mom. They were jousting on the opposite side of the dining area. His lips were sealed. His eyes, defiant. He shook his head from side to side as she spoke quietly to him. They were quiet, but the tension was obvious. In one brief moment, he and I made eye contact. We smiled together. He was on the verge of dropping his defiance. Suddenly, his mom got up and left the room. In the very next moment, we began a mime that lasted nearly five minutes. I imitated his every move. He was thrilled with the attention. We had great fun. And when his mom re-entered the dining room, utterly unaware of what her son and I had created, her impudent young monster had become a smiling, happy little guy. Had I eaten at The Plaza on that day, I wouldn’t be telling you this story. In acting class that evening, I did the same thing with my scene partner. The gods may be crazy, but they’ve been speaking more coherently lately.

Now I’m back in Iowa trying, without too much desperation (really and truly) to figure out whether I can happily live without the subway, without great food, without that never-ending parade of people loaded with angst and intensely political stances, without the joy of walking along Lexington Avenue, one of my favorite Manhattan streets. Lex is a fascinating urban mosaic, simply loaded with great small retail

and restaurants, and it’s lively with pedestrian energy all day long, the exact opposite of all those sterile shopping malls that have cast their sad grey pallor over so much of the Land of the Free. I can walk along Lex feeling perfectly charmed, without spending a dime on anything.

Before I left for New York, I hired some dudes to give my postage-stamp yard a thorough makeover. They got rid of all the weeds and really tarted the place up. They put down a ton of mulch. Everything was really neat and orderly, so when I returned to this mess,

I began to think, first of all, about why I’m suddenly sneezing as if I’m making up for many lifetimes without a working nose; and, second of all, I’m thinking of her majesty Central Park, where I walked nearly every day, where I met interesting humans and all manner of dogs,

Getting around the City that Never Sleeps using its subway and bus services confers an enormous advantage: you get to see the denizens of the Apple and you get to feel what it’s like to be among them. You don’t really get to know a city when you’re locked up inside a car. Manhattan upholds an array of humanity so vast that your mind cannot fully digest its breadth. The variety in the city is such that you will almost certainly learn, 1, that everyone on Earth is just like you and, 2, different from you, too, so 3, it’s utterly useless to compare yourself to anyone else. The place has grabbed my heart as no other place has. I felt more simple spontaneous love in that city than I’ve felt anywhere else. 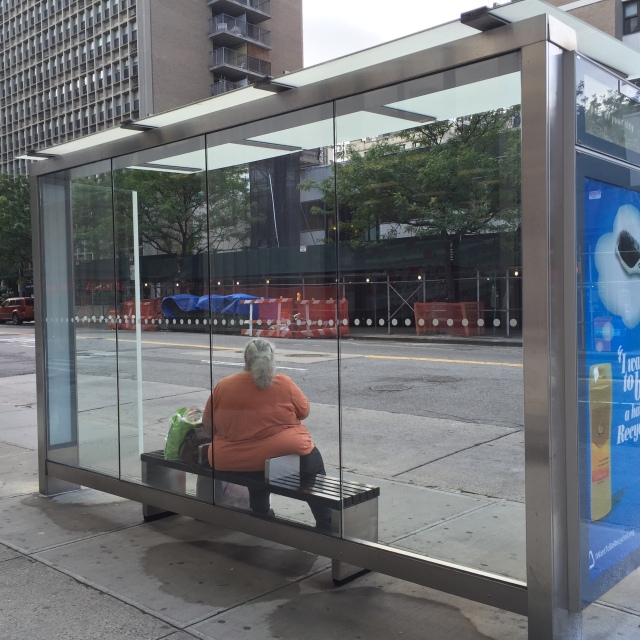 When my grandmother, a native New Yorker, was around, she awoke each day to the sound of a Baby Ben alarm clock. Baby Ben did not have a snooze button. So I’ll assume my grandmother did not snooze. She got up when Ben’s bell rang, and that was that. Life was simple. You didn’t have the excuse of the snooze button. You did your job and you did it on time. You honored your duty. You honored your self.

The idea of not snoozing brings me to this powerful speech I watched yesterday for at least the third time. It’s titled “How to Stop Screwing Yourself.” The speaker, a dynamic woman named Mel Robbins,

says this: if you have an impulse to do something and you fail to act on it within 5 seconds, you have essentially hit your own snooze button. This, she thinks, is how people get stuck in their lives. From my vast repertoire of experience with fear and inaction, I know how right Mel is. I’m about to be 63 years old and, dammit, I have barely begun to live.

So I’m trying to add it all up, to decide whether I should commit to at least a year in the Big Apple, pay the sky-high rent to live in a sky-high building on the Upper West Side, one with an amazing rooftop terrace

and a bank of elevators I’ll depend on to get into my nest in the sky. Circulating in my mind around this idea are a few thousand thoughts every hour, thoughts like what should I do with my twelve-year-old cat, whether I should take her to NY where she may never roam the great outdoors;  whether I should replace the noisy, afflicted food waste disposer attached to the underside of my kitchen sink; intermittent worries about how much time remains in this life and what’s the very best way to spend it. It’s getting harder by the words on these very pages to resist moving. Then again, maybe I should just wing it, literally, and fly here and there, stopping in each spot long enough to test the water.

Here are some facts on the ground. If I let Volkswagen buy my two diesel VWs back, that will pay for my entire year in Manhattan, including the rent and a bunch of lunches at Gigi Cafe and some off-off-off Broadway shows (they’re the best shows), too. I won’t need a car in Manhattan. I love the humanity/inhumanity of the subway, the socialistic ethos of mass transit. I’ve done my time being trapped in cars on roads that turn into parking lots, where you’re stuck seemingly forever just trying to get home from your job. It’s sheer madness. Cars are a great ego trip, but, really, you just need to get from here to there and back without expending a ton of energy, personal and geological.

And how I loved the Improv acting class I took. How liberating it is for you and your partner to create a bit of business from mere thought and oxygen, and your only rules are 1, that you always say “YES” to whatever your partner hands you, and 2, your main obligation is to make your partner look good! How often in this show we call life do you get to play by rules that encouraging, that simple, that beautiful, that supportive? Improv is a sweet slice of unconditional love. Have you ever heard of the Upright Citizens Brigade and Annoyance Theater? I dare you to resist seeing one of their shows on your next tour of the Apple.

Freedom is what it’s all about, friends, and I’m here to say that you should grab it any way you can and as soon as you can, even in the midst of your job and your overgrown yard and your hungry, attention-starved cats and dogs and the growing pile of laundry and dirty dishes. Exercise your freedom any way you can. Start yesterday. Nourish it. Cherish it. Go away on weekends. Sing in the shower. Speak to strangers who look interesting. Tell more people you love them. Do the very best you can, because this is one crazy, mixed-up world driven mostly by money…but really and truly, it’s driven by something else entirely.

But we all know that, don’t we?