Where I was last night

The contrasts that make Manhattan fascinating arise suddenly, almost secretly, such that one must dig not only to discover them, but also to plumb their depths. Doing so you’ll discover a wealth of history—and some remarkable connections that can span the globe. 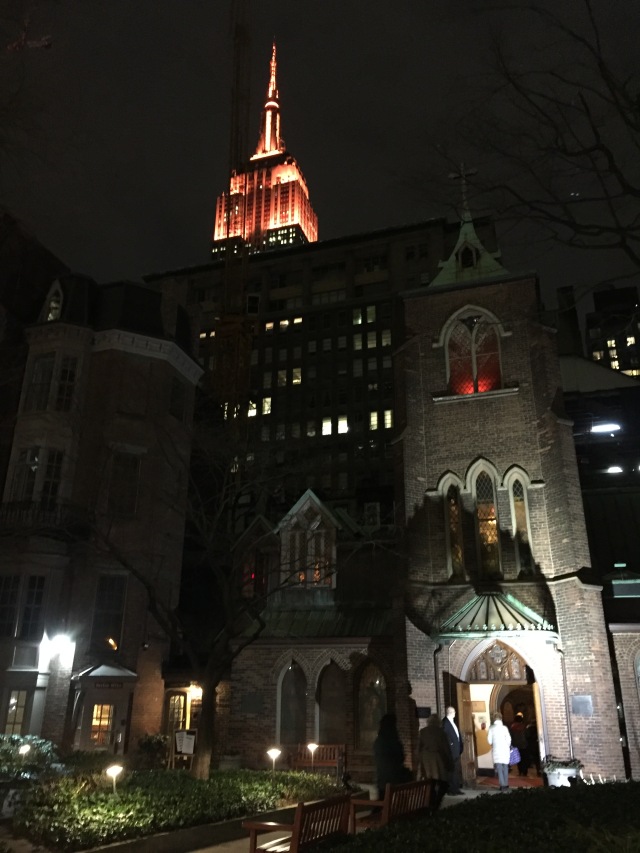 That very famous skyscraper stands guard over the Church of Transfiguration

The subway ride that gets you on your way often feels like traveling in a car with a crazed, possessed driver who whimsically stabs the brakes and punches the throttle as if he’s navigating a barely visible winding road in the dead of night. You wonder at the miracle of this underground railway, how they keep the trains grinding along night and day and even on Christmas, too. New York most certainly slows down, and it most certainly never stops. The trains ride quite smoothly on the metal rails, smoother than most cars ride on the tarmac. They just lurch a lot. Maybe that keeps New Yorkers more alert.

After the train ride, you climb the stairs, and again you’re on your feet, on the street where everything is glass and steel and hardness nearly unrelieved, save perhaps for the air, and you have to set your imagination to work to remind yourself that the work of man can also be the work of God.

I had come out tonight to hear the Gateway Orchestra play at the Church of the Transfiguration, and especially to once again hear Dvorak’s New World symphony, his ninth.

In Stuyvesant Square you’ll see this tribute to Dvorak, who lived in the city from 1892-1895

If you’re a great composer, nine is the magic number in your inventory of symphonies. Everyone knows Beethoven’s Ninth,

Ludwig Van Beethoven: the depth of his conviction is obvious in his face

vast, enormous Ninth, which I have read somewhere is a tribute to the power of nature. It ebbs and flows into near-tidal waves of sound for about an hour. If you haven’t heard these two, your time has come. I’ve made it easy for you by including the links. At least hear Dvorak’s Ninth; in it you may hear all the emotional colors even now on display in this continuing experiment in democracy we call the United States of America.

Dvorak launches his Ninth with a bang. As he moves along, the sounds flow melodically, seamlessly, through angst and turmoil and dark, brooding moments relieved with tenderness and light-hearted joy. To my ears he expressed the dynamics of America very well.  Few composers captured emotions as did Dvorak. In “The Lives of the Great Composers,” Harold Schonberg wrote of him, “…life was a very wonderful, uncomplicated thing to him. He remained throughout his entire creative span the happiest and least neurotic of the late Romantics. God, love, motherland was his motto.” His simplicity lent itself well to his facility of expression, and in addition, he had a great talent for melody. Beethoven lived a much more challenging life, and his work shows it in his more complex textures. Dvorak is often light and simple.

In September 1892, a Mrs. James Thurber, the wife of a wealthy grocer,  invited Dvorak to come to New York to head the National Conservatory of Music, of which she was a founder. With his family, he took a 5-room apartment on East 17th Street where he wrote most of his Ninth. He spent the summers scoring  the work in the Czech-speaking town of Spillville, Iowa, where he had relatives. Seeing Iowa and traveling across the country gave him the sight of those wide-open American spaces, undoubtedly a strong influence in his composing. The appeal of his music remains strong; it’s found frequently in the repertoire.

Dvorak’s melodic theme in the second movement became the basis for a song, “Goin’ Home,” composed by his pupil William Arms Fisher, and sung by Paul Robeson in the rendition I’ve linked. Robeson, a man of considerable athletic and artistic talent, was blacklisted during the McCarthy era for his other major talent: questioning conventional ideology. And, speaking of going home, that’s exactly what Dvorak did in 1895. Feeling acutely homesick for native Bohemia, he and his family returned there in April of that year.

The Church of the Transfiguration is so named for the transfiguration of Christ, who as the story goes began to shine with bright light after he ascended a mountain to pray along with Peter, James, and John. The prophets Moses and Elijah soon appeared next to him. They spoke together, and then came a voice from the sky calling Jesus “Son.” The broader significance is that there, on that mountain, human nature met almighty nature, creating in my humble view a more purely spiritual, less religion-specific event. This is the goal of all religions, the end of all spiritual aspirations: the union of God, or nature, or the divine—whatever term you like to use—and man.

When I found the courtyard at the little church around the corner, I saw a safe, inviting, very green harbor which at first excited me and then soothed me as would an oasis in a desert. The church has, in fact, been an oasis for the poor and oppressed. Its founder, George Hendric Houghton, opened the entire church to African-Americans who were under attack during the 1863 Civil War Draft Riots, the largest such riots in American history. Later, when a nearby church refused to perform a funeral for an actor, Houghton’s church held the funeral, initiating the church’s long association with the theater. The Episcopal Actor’s Guild held its first meeting there. Since the church’s founding in 1848, it has had only five long-serving rectors, and still offers no-cost music performances to the people of New York.

The soil of this city has borne innumerable facets of humanity and human behavior, from the highest and most noble to the unthinkably low. I imagine it continues to do so as this nation undergoes what will prove to be a great transfiguration. Life on its way to someplace better always includes change. The clouds will surely gather. And, just as surely, those clouds will clear. This, I think, is the story of life; it has certainly been my own.

In this challenging time, perhaps great music can be part of your solace as it is a part of mine, especially those works created by individuals like Beethoven, Dvorak, and Schubert, three of the well-known among the many other skilled composers who magically distilled what they felt into the avenues of sound. Their works smile upon the constant assault of time, their appeal undiminished by changes in musical fashion. Maybe you can find in them an emotional map of your own, a guide to that aspect of human nature that remains unchanged today, despite the passage of many thousands—or perhaps even millions—of years. And let us hope that Beethoven’s dream—Alle Menschen werden Brüder—is now much closer than it was in his day. I hope we’re earning that sweet brotherhood, so we can all go home and live there happily, wherever our home may be.