The bomb fell a mere two weeks after I landed in India, after my friend Alam

Sahidul Alam, wearing a shirt that only Indians might be able to explain. Here he’s preparing to meditate. He has a rare sweetness and a huge heart.

and I had already endured a sleepless train ride, 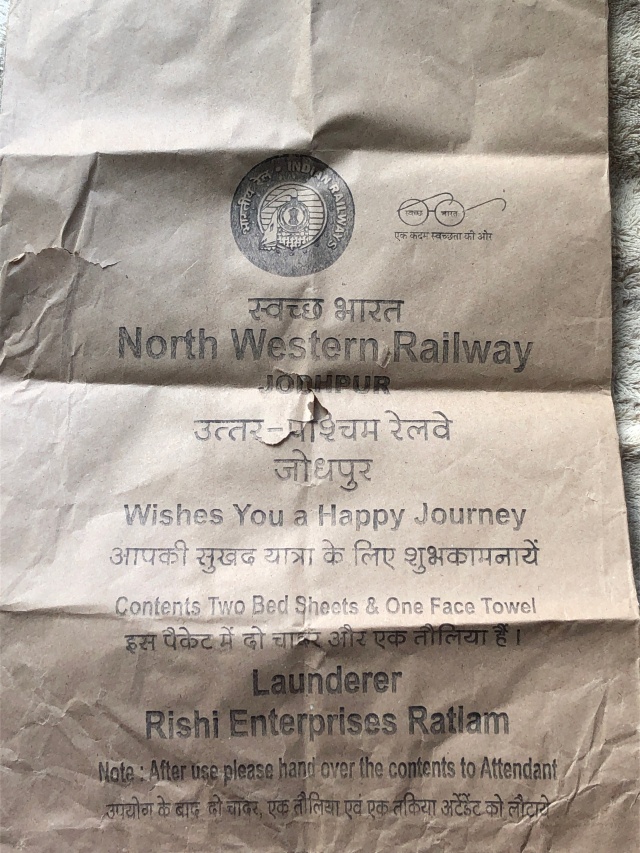 the rigors of air travel, and long hours in the car. We covered a lot of territory. After a night on the banks of the Ganges in Varanasi, we took supper at the hotel, where I ate some bad ghee, which brought my gut and the rest of my nervous system to its knees. Everything I had been just slowly shut down over the next several hours.

We spent four hours in the car the next day to travel to Darjeeling,

where they grow the tea. The people seem to be mix of Chinese and Indian. It looks like life is a real workout there, a place positioned between two very different cultures, both struggling with modernity. The mountain road is tortuous, slow. Our progress was halting. 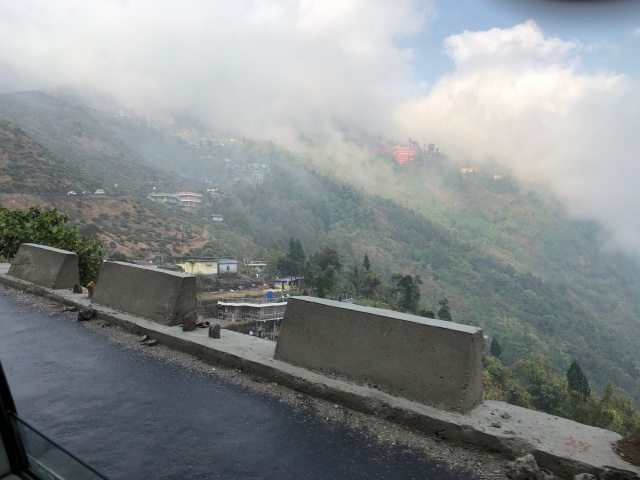 The weather was unusually cold, and the hotel had no heat. A portable heater warmed our room. There were lots of stairs to climb. The dining room was frigid, and there was no lunch buffet though the setup was present. We languished in our room for two days while I thought—albeit very dimly—about how I could get my gut working again so I could take nourishment and start to feel alive again. But by this time, the mere idea of hotel food was repulsive. Just consider that for a brief moment from the angle of a thoroughly walloped gut.

So once again we are in Delhi, this time at the Maharishi Ayurveda Hospital. The technicians are cleaning my works, bringing me back from a near-comatose state. The food is simple—kitchari, dal and veggies, just delicious, very fresh, with chapatis hot and soft, right from the stove. Everything I eat feels deeply nourishing. I feel such joy taking food again. Eating pure food cooked for your nourishment is a much more important part of life than most of us can imagine. It is a holy act that most people do not properly honor. I try, but obviously I have much to learn—especially about taking food in India.

Last night, after my evening treatment, my mind went into overdrive. I started thinking about all the little adventures I get into. One of them filled my awareness: the Italian radio show I produced at a young and growing FM station in Raleigh, NC. Here’s how my brief radio career came to be.

Late one night I was exploring the lower end of the FM dial when I heard Italian from the speakers. I leaned in close and listened carefully, almost in disbelief. The show, called “Radio Italia,” was a weekly compendium of news, sports, and information from Italy, produced by a local IBM Italy employee for the enjoyment of his fellow local Italians.

I was well into an Italian phase of my life at the time. The mere existence of that show captured me. I had learned to speak Italian at UNC-Chapel Hill in 1972 after traveling in Italy in 1970 and 1972. I was thoroughly smitten with Italy. Thanks to that Italian course, I made the dean’s list that semester. Then, thanks to my approving father, that spring I became the very proud driver of a sparkling dark green 1973 Fiat 124 Sport Spider,

which I think is one of the greatest sports cars ever to grace the Earth’s roads. Its engine was designed by Ferrari engine designer Aurelio Lampredi. The body was the work of the famous carrozzeria Pininfarina, designer of many classically beautiful cars from all the greatest marques. There will never again be anything like the 124 Spider. It was a pocket Ferrari—or, as my parents put it, “A young man’s car.” They loved seeing me in that car. It made them very happy that I had it. And it made me very happy, too, for 14 years of sweet motoring.

During the next show, the producer surveyed the audience to determine whether the show would survive. I was the thirteenth caller, and I spoke with the show’s producer. The show would survive, Silvio told me, thanks to my call. Thirteen was the lucky number. I met with Silvio the following week, along with his beautiful wife Concetta. When they spoke Italian, they made me swoon. There is no language as sonorous as Italian. You know why? In English, we have words like house, car, dog, and cat. Italians say casa, macchina, cane, and gatto. Italian words are liquid. They flow. Those “ahs” and “ays” and “ohs” at the ends of those words connect them to the word that follows.

While Silvio showed me the ropes in the production room, he told me that someone else was interested in the show. “Ivana Moskovitch. I think she is an IBM-Italia employee. Please give her a call.” He handed me a slip of paper with her number written there. Again I was captured; I’ve got a fascination with anything across the ocean. As soon as I was home, I dialed the number and asked for Ivana.

Ivana was not there. This was not a time when Raleigh was loaded with women named Ivana, so Ivana should have been hard to miss.

I tried again the next day. “Ivana? There is no Ivana here. Who else can help you?” No one who answered identified the line in any way. Their side always sounded empty, dead, like an empty room.

I carried on for several days, and Ivana finally turned up. She lived in an old part of Raleigh called Five Points. The phone number, I found out, rang a pay phone inside the house where she lived. I had never encountered such a setup.

She wanted to help with the radio show, she said. Her speech was distinctly European and definitely that of an old woman. I asked for her address and told her I’d come to pick her up on Saturday after lunch.

Saturday came, and so I went, to the house where Ivana lived, in my Fiat Spider. Despite her age, Ivana had no trouble getting into the low-slung Fiat. I knew she wouldn’t be much help in producing the show. She wouldn’t master the technical details or the equipment. Mostly she sat while I ran the works.

“Radio Italia” was a simple production. We’d connect with Radio Audizioni Italiane, as RAI, the state-owned Italian broadcaster, was then known. We’d record their news segment and add it to the show along with some music. We had a few LPs by Julio Iglesias and Charles Aznavour, neither of whom was Italian, but who sang in Italian. The material was limited, but we kept the news fresh by taping the shows from RAI every week.

The coolest thing was that I landed a sponsor, the garage where I always took my beautiful Fiat Spider for servizio e manutenzione. I’d become friends with all the mechanics over the years. They had the greatest respect for me and my Spider, which was known all over town as one of the best, a car enthusiastically driven and lovingly cared for by the most loyal and fanatical Fiat guy in Raleigh. Auto Tech, or more properly, Automotive Technical Services, agreed to underwrite the show. I was thrilled.

That’s the Italian way of saying “Welcome to Radio Italia, a weekly show of music, culture, sports and news from Italy, produced by Ivana Moskovitch and Russ Wollman. This program is sponsored by the house of Automotive Technical Services of Raleigh.”

Week after week I’d pick up Ivana and drive the Fiat to the station. I’d listen to her complain about the problems with her son, a man whose first name was Mark but whose last name was not Moskovitch, but was instead something like Brkgt—one of those Slavic names that ought to have a vowel (or two) but doesn’t. The main problem she had with her son was that he was “dating a bleck girl,” and that just made all of Ivana’s little old European brain cells cringe. Undoubtedly, she’d carry that to her grave.

Speaking of which, as we walked out of the station one day, Ivana, who was none too steady on her feet, fell face first onto the concrete stoop outside. One minute she was standing erect, and in the next moment she was kissing the concrete. I was flabbergasted, prepared for the worst. With a little help, she lifted herself right up, dusted herself off, and kept right on going, with nary a dent. I just remained flabbergasted.

Ivana showed herself to be a tough old bird. But the incident struck terror in my heart. The show had become stale, and we’d exhausted our supply of Charles Aznavour and Julio Iglesias songs. The radio station was changing to classical music 24/7. Radio Italia had to go. Neither Beethoven, nor Mozart nor Rachmaninov would move aside for us. It was a little sad, as many departures are—and such a funny thing to recall while I recuperate in Delhi.

And speaking of funny things, there is a group of eight Italians here taking Ayurvedic treatment. I spoke with a few of them, and as we spoke, I felt that crazy thrill in my heart that rises whenever I speak Italian, and whenever I think about that sweet Fiat 124 Spider, a 4-wheeled companion that carried me well over 100,000 miles all over the eastern side of the US.

Some things you simply cannot erase.

The month in India was challenging. India just overwhelms the mind and senses. There’s just so much you can take in before you’re exhausted. I wouldn’t have gone as far as I did without the company of my great friend, Sahidul Alam. He’s from a small village in West Bengal. He has big dreams, a big heart, and a great family. Yet, even at his young age, he has known struggle and hardship, as I imagine many people in India have, and he knows the importance of self-sacrifice. I’m very lucky to know him.

My feet are finally in the water, and I want to keep them there.
View all posts by Russ Wollman →
This entry was posted in India, Italy, Love, Uncategorized and tagged Darjeeling, desperation, dreams, faith, friendship, hardship, India, Italy, love, relationships, the heart, traveling, West Bengal. Bookmark the permalink.