OKay now, just for fun, I happened to recall certain things from my childhood—which is still in progress, but at a later stage.

I’m going to share them with you here. These are among the most intimate details of my life, so please, laugh gently and kindly if at all possible. Forgive me my current trespasses. And if something I’ve written strikes your fancy, just nod your head and smile.

2. In a similar vein, I did not refer to places outside the home where people ate food as “restaurants.” They were “renstaurants.”

3. Like many children (I hope), I sucked my thumb, and I had a favored blanket, which I called my “foofing yay-yoh.” I’d carry the blanket as I made my way around the house, holding it close to my face while I sucked my thumb. It takes guts to admit to stuff like this. 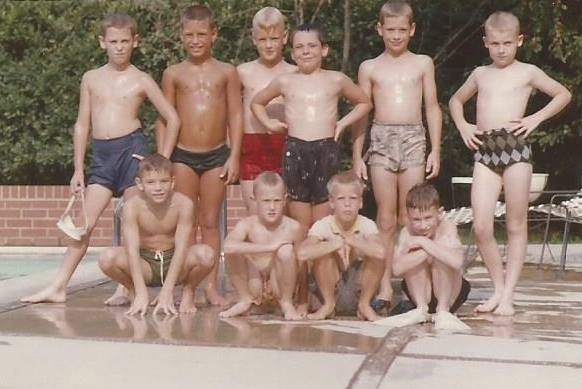 Proof that I was a little boy. But which one?

4. These next are rather obscure. I say that because I can’t recall their exact origin, though I think it was some cartoon. I’m not even sure how to phrase these. Anyhow, there were two dogs to which I sometimes referred. They were the “Nelson dog” and the “Pillow dog”. Please don’t ask for any more detail about this one; they’re long gone.

5. One day during third grade, I stuck a female classmate with one of my favorite pens, pretending I was giving her an injection. Mrs. Mumford immediately confiscated all my pens. From that day on, I frequently plotted how I’d break into the classroom after hours and get my pens back. Of course, nothing came of that, because it involved breaking glass and picking locks. And I assume Mrs. Mumford took my pens with her when she left the earth. She was that sort of schoolmarm.

6. One night at supper we had a guest, Mr. Goldsmith, who was my grandmother’s boss. He had very large ears, which my sister did not fail to notice. She told him he looked like an elephant. After having his fill, Mr. Goldsmith fell fast asleep in his chair at the table. He never again came to supper at our house, and we never saw him again.

7. Then there was that Saturday when we, meaning my sister, my friend Joel Josephs and I planned (I use that word “planned” very loosely) to open a travel agency in a vacant store in my father’s building in downtown Raleigh. We started our venture with a power lunch at the Hudson-Belk cafeteria. The big problem was none of us had money when time came to pay. My sister and Joel remained behind as hostages while I stole lunch money from the petty cash in my father’s office a few blocks away. We never opened the travel agency.

8. On another Saturday, which was our movie day, there were three remarkable people in downtown Raleigh’s long-gone State Theater: the man who couldn’t stop coughing; the man who fell asleep and snored loudly; and the woman who was so large her tummy stopped very close to the back of the seat in front of her. I remember remarking that she was as big as a 1958 Oldsmobile. The movie was something like “Move Over, Darling” or “Pillow Talk” or the one where Doris Day drives a Chrysler Imperial convertible through the car wash with the top down. That’s the sort of stuff we watched.

There may be more to come, but I’ve run dry. Maybe someone else out there has some outrageous history to share?

My feet are finally in the water, and I want to keep them there.
View all posts by Russ Wollman →
This entry was posted in Family, Humor, India, Raleigh, Uncategorized and tagged childhood, Elephants, humanity, humor, India, life, young. Bookmark the permalink.