It’s a Most Unusual Play

Well, this week is shaping up to be a good one for the thee-atah. Monday night was excellent fun, because “The Play that Goes Wrong” lives up to its name and then some. It’s an off Broadway show, so good I will see it again in early June. It’s marvelously wacky and unpredictable. If your life lacks stability, you might feel threatened by every moment of it. Or it might be just the ticket. Don’t miss it if you’re in the city.

And last night I saw Sam Shepard’s “Curse of the Starving Class,” which, now that I’ve read about it, is worth more laughs than I found while seeing it. In Act I, the young man of the subject dysfunctional farm family walked off stage and returned with his arms full of one young lamb, Annie, 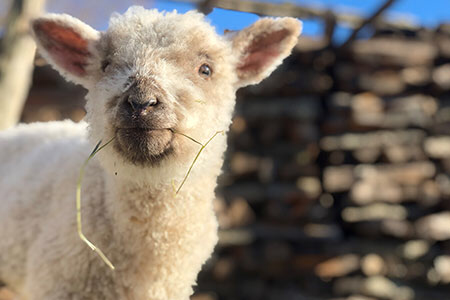 This is Annie, who stole the show.

who he placed into a simple cage. Annie sniffed the environs quietly for a few moments. Then she lay down to rest.

Well…as soon as I saw that lamb, I lost interest in anything else on the stage. Nothing else mattered. They were, as far as I was concerned, another family consumed with angst and/or anger, saying impolite things to each other; and, on the sweeter side of life, there was a fleecy, off-white, semi-large animal there who uttered not a sound and seemed quite content to nap quietly while the humanity around him, unfettered by a cage, descended, kicking and screaming, into hell.

One reason I can make a comment like that about a significant and widely-acclaimed work of great social import written by a man who was widely respected while he was alive, is this: everywhere I wander in New York, I see people of all descriptions (who may be living the lives I saw on stage) who could be actors and who even look like actors or look famous or look like they could be famous…but I have never seen a lamb anywhere—except on that stage last night. That was a real treat. And that lamb IS famous.

The lamb in Curse of the Starving Class is named Annie. She was an orphaned bottle-baby acquired by famed animal trainer Bill Berloni. Bill has been providing animals for theater for over 40 years. This will be his third production of Curse of the starving Class and his fourth production with lambs onstage. In addition to being an animal trainer, Bill is the Director of Animal Behavior for the Humane Society of New York where he has cared for animals for over 25 years. Bill is a licensed exhibitor with the USDA and is under the scrutiny of the USDA, the State and City of New York. Annie currently lives in a house with her handler, Schuyler Beeman, a shepherd. Schuyler will take Annie into his flock in rural Connecticut after the production where she will spend her days producing wool.

And then, wonder of wonders, as I waited for the A train in the 42nd Street station, a handsome young man waited, too, along with a beautiful and sweet-natured Shiba Inu, “She’s two years old,” he told me. He was clearly smitten. I thought she looked like a puppy. She greeted me without fear or hesitation. She had the sweetest, most beautiful face I have seen, and thick, creamy white fur almost as soft as my cat’s. I was enjoying meeting her so much that I didn’t think at all about taking a photo, so I’ve appropriated one that’s close.

If ever I want to have a dog companion, the Shiba is my top choice.

When the train stopped, we got into a brand-new car. The floor was immaculate, devoid of the usual dirty newspapers, splatters, and the half-filled drink rolling back and forth on the floor. The seats were  unmarked and shiny. The metal work, the rails and panels and window frames and all that—every bit looked like art, like a special industrial design project. It rode quietly and smoothly on its air suspension. That air suspension is why you don’t feel hammered riding in these long heavy cars running on steel rails. You’ll see the car’s height shift a bit  at stations. That’s the air suspension doing its thing, compensating for the changing weight of the car as people enter and leave it.

Speaking of dogs, they never fail to harness my attention as I walk through the city. I love all of them—and there’s all manner of dogs here, from mutts to purebred aristocrats. You will see, if you’re paying attention to the scene as a little boy would, that there are lots of French Bulldogs. They’re the overwhelming NYC favorite. They look a trifle haughty, but they’re friendly and quite open. And Yorkies—I think that’s what they’re called—many people have them, too. One man I met briefly had five.

Sometimes I think I live in protected bubble, right here in Manhattan, as the nation goes absolutely crazy around me. Another school shooting, this time in my home state, North Carolina, took the life of a young man who undoubtedly saved quite a few others. That makes me very sad. Everyone’s up in arms over a few cases of measles. Some  want to force everyone to be vaccinated, which is utterly opposed to the freedom that this nation claims to represent, and quite dangerous for some. The usual salivating over the coming election has begun, and it’s just a crashing bore. We know who really runs the country, right?

I am as hungry for change as anyone. But life is funny, and the collective life of a nation is quite complex. We think we walk on both feet, putting one in front of the other. But one gets stuck somehow and can’t move quite as far forward as it should. We make progress, but it’s fitful and sometimes arduous. Something holds us back, and we can’t always know what it is.

So here I am, at 65 and counting, living in a huge city, taking no medications, still wondering what to do with this life. And yet I manage to fill the hours pretty well, and sometimes productively…just ask my cat.

My feet are finally in the water, and I want to keep them there.
View all posts by Russ Wollman →
This entry was posted in Humor, Love, Manhattan, Uncategorized and tagged beauty, frustration, growth, humanity, humor, Lambs, life, Manhattan, New York, Off Broadway, Shiba Inu, Shows, subway, the heart, Theater, whimsy. Bookmark the permalink.