Once upon a time, I drove somewhat regularly to the Outer Banks of North Carolina. And on one those drives, the mighty Atlantic Ocean washed away NC Route 12, the only road that goes south past the town of Nags Head.That meant a ferry ride, a much longer journey, and especially for me, a heightened sense of how remote and unusual the Outer Banks are.

I read that the Outer Banks extend as far east into the Atlantic Ocean as is part of the state of Maine. I haven’t verified that, but it would explain the extreme weather that the OBX (as they’re commercially known) are famous for, and why Route 12 disappears. At some points, the Atlantic Ocean is a stone’s throw away from the east side of the road, and the Albemarle, Currituck, or Pamlico Sounds are as close by on the other. 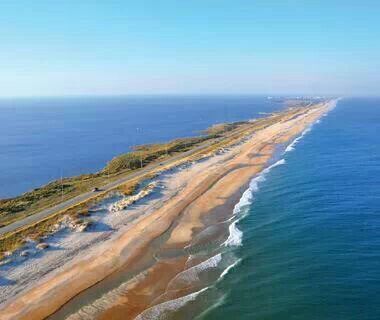 The view south toward Hatteras Island.

Those are familiar, comforting names from my home state, North Carolina; they remind me that I’m not far from there, no matter where I may be.

I’ve been on some silent, desolate OBX beaches of the OBX. They feel more wonderfully wild than any I have known. They lie far from the din and the daily grind. They yield only to the endless rhythm of the tides; they do not suffer the tourist and the sun-worshipper. Life is different there. Nature prevails, and everyone must obey her.

You could measure the distance between the Outer Banks and Manhattan (for example) in all kinds of ways, physically, culturally, regionally, climatically, politically, and even linguistically.

The automobile—in these times a relatively crude piece of technology—lets you reach the OBX just as you’d drive to any place. You drive past the town of Nags Head and continue south on Route 12. And an hour later, when you get out of your car, there you are, a considerable distance east out into the Atlantic Ocean, without any swimming at all.

Recently, I went with friends to the Empire State Building (ESB for short, like OBX). 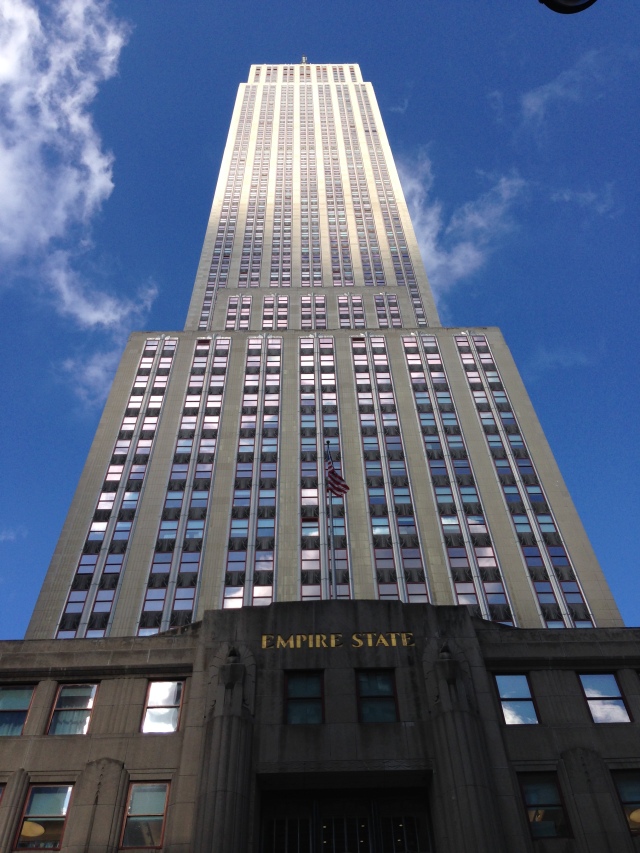 I explained to them that everyone has to go there during a visit to the great City—and it was my treat because I talked them into it. Truly, I think almost anybody would love being up there, even if their calves turn into jelly, which is what my calves do when I’m ‘way up high and look ‘way ‘way down. The ESB isn’t just tall. It has a big footprint and even its own postal code. I heartily encourage you to click on the link and read the Wikipedia article on the ESB. It’s fascinating.

Elevator number 1 is a trip. Once the doors close, the car becomes a small movie theater. As the elevator car ascends, you ride up in space and back in time, watching the progress of the building’s construction that appears on the ceiling from floor to ever-higher floor, complete with genuine New Yawk construction guy talk (“Hey, Lou, do somethin’ useful, don’t just hang there”) and scenes of macho daredevils hanging loose on steel girders taking their structural place in the sky above.

Elevator number one took us to the 72nd floor, or some such absurd number—in an absurdly short amount of time. That elevator was movin’. The 72nd floor is quite high in the sky, not as far up as you’d be out on those Outer Banks, but it is at least as extreme, only different.

After the first ride, we were promptly guided to another elevator, which took us to the observation deck on the 86th floor. Rain was falling intermittently, so people were alternating between the inside and the outside areas, taking Selfies as they faced the camera, with Manhattan Island behind them. Inside, a little boy was having the time of his life rolling around on the floor, blissfully unaware of the grand sightseeing opportunity. He smiled at me when I smiled and pointed at him. The little ones are evidence that magic is alive in this world.

In that rarified air, you can still hear the sirens that plague Manhattan (why do they have to be so loud?), and nothing else. The quiet is eerie, mysterious, because at the street level, the city is threateningly loud. I don’t understand how small dogs out for their walks can bear the noise and the commotion. Way up there on the 86th floor, you see vehicles moving in total silence on the city streets. All of Manhattan lies before your very eyes, quietly showing off her incomprehensible density and her man-made majesty. There is nothing comparable, nothing that I’ve yet seen. This is an island unlike any other, though it lies in the water like those Outer Banks do. I wasn’t sure Manhattan was an island until I took the CircleLine cruise around it, which is another cool thing to do here.

In the distance you can see the Statue of Liberty, the ships slowly moving through the Hudson River, parts of New Jersey, Brooklyn, and more man-made structures than you will ever see anywhere else. There’s no glass between you and all that, no enclosure save the forbidding protective fence that would rip you to shreds if you tried to climb it. 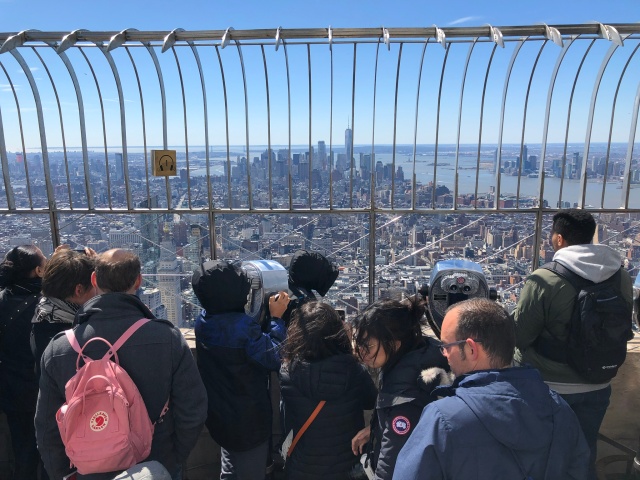 This is obviously from a BSD, a bright sunny day, which our day was not. But it shows the toothy fence between you and the air up there.

Then, all of a sudden, we were in the clouds. Grey was all we could see. Then, just as suddenly, the skies lifted. 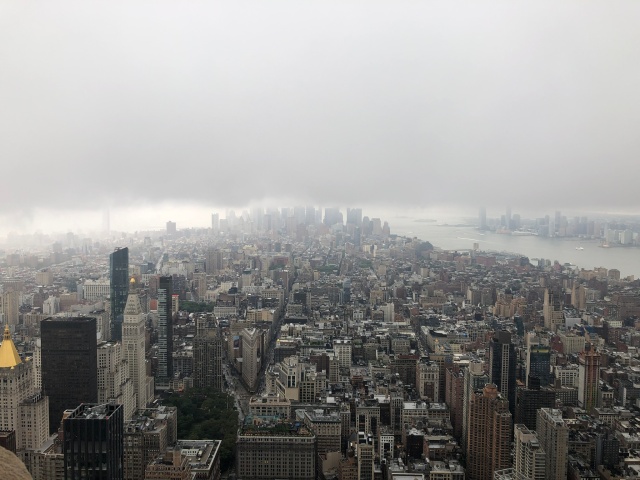 I was looking west when I became very emotional. Maybe it was the height, or maybe it was New Jersey. I’ve heard that people, especially people from the southern US, can become agitated at the mere mention of New Jersey.

Distances. That’s why I began to write this story. We deal with matters of distance all our lives. We have to cover distances on foot, by car, or by bicycle or train, depending on our age, for example, or where we live. Should the distance be thousands of miles, such as a journey to India, we take to the air, because today there is no time to go by boat—and it’s likely no boats go to India. But I think once upon a time, they did.

It’s quite remarkable, really, to board a plane in New York and several hours later, to step off and walk on Indian soil, without seeing even a smidgen of the huge swath of the world that passed beneath you as the plane flew. During the flight, the place names come and go on the route map shown on the little screen ahead of you, places that never make headlines, places you’ve never heard of. You can only assume they’re real, and you make a mental note to research them after the flight. They seem so distant, so far away.

The distance between me and my late family has become oceanic. My sister was the last to leave, in 2010. I think we were distant even when all of us were living. With a little imagination, I can see them in my mind’s eye. I can hear their voices, albeit faintly, despite all the yelling that we did. It takes conscious work to conjure them. I do more than enough of that kind of work, so they appear infrequently.

There is still a baffling distance between me and someone I love. Sometimes I try to adjust the distance, to increase or decrease it, depending on whether I feel pain or longing. But when I try to increase the distance, something happens from his side that foils me, and I see how useless it is. Love is still alive there, but as a potent, confusing mixture of memory and hope.

Sometimes, after I leave the soft quiet of my apartment, the atmosphere of Manhattan feels light-years away from me. Being here,  I have learned something that goes against my nature: I have learned the sometimes useful skill of avoiding eye contact with people. I tried making eye contact for a while, until I saw that most people don’t want it. There are tons of people here, so we get close whether we like it or not. It hurts me to consciously avoid people, because I want to connect. My greatest hunger is for connection. I don’t live within many of the usual boundaries or the usual fears. Lately, I find charm in watching kids and dogs, which the streets of this island have aplenty.

I’m a lot better at connection, at bridging the distances, than I once was. I’m very grateful to have fallen in love every single time I have, even if it turned into a baffling, confusing and awkward dance.

It’s a miracle, really and truly, that I have lost so many of the boundaries that kept me distant from others. For a while I was afraid to get close to anyone. I did not trust my own affections; I feared the movements in my own heart. I was uncertain of my own love. But I’ve made great strides in conquering the distances. It’s a much more remarkable conquest than the way those airplanes conquer the distance between New York and India. The emotional journey is a lifelong and very involved process. 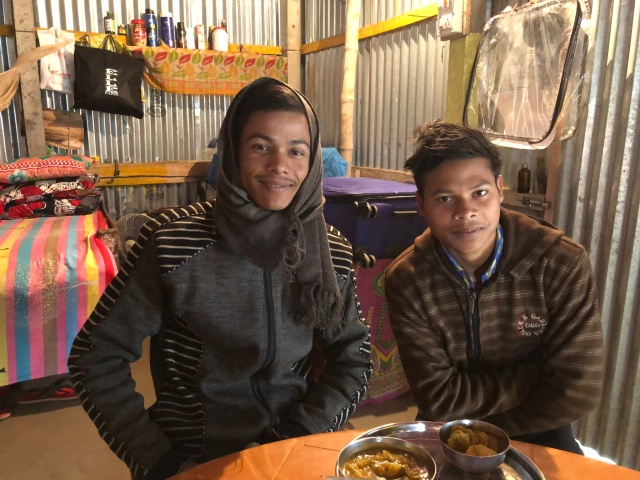 JiThin Chandran and I connected via Facebook, and we met soon after in Kerala. He obviously loves his cat. 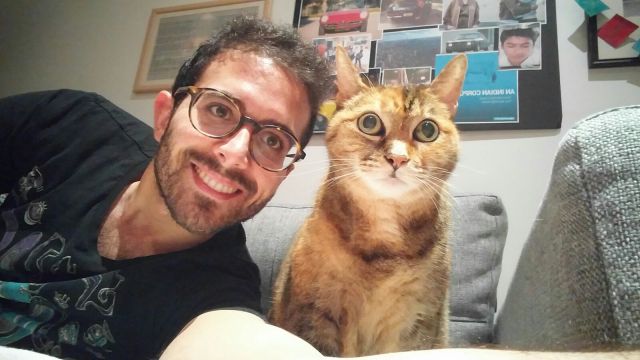 Valerio Buonomo from Milano is on the left, and my cat is on the right.

The world is falling apart and coming together. Someday love will just wash over all the boundaries and the distances, and we will be really free.

In the meantime, manage your distances well. Keep certain distances short, like the distance from your friends. Ideally, the food you eat should come from somewhere close to your dinner plate. That’s much easier said than done, of course, unless you grow your own. Being a locavore is all the rage. I do what I can. I work at the tiny and mighty volunteer-powered 4th Street Food Co-op, which is located, logically enough, on 4th Street in Manhattan, just off Bowery.  Almost everything we offer there is organic, and some of it is local.

Organic food in many ways (especially biologically) has come to your plate via the shortest distance from nature, especially if it’s fresh organic fruit or veggies. Organic is the purest food you can eat.

Stay far from earthquakes, fires, and floods. Avoid quicksand like the plague. Never take shortcuts when descending dark or unknown stairways; take one step at a time.

Hard though it may be, keep your feet on the ground. That way, your head can safely be in the clouds, which is a fun place to be. Don’t take telephone solicitations. Many will try to sell you something. You owe explanations to only yourself and a very few close friends. And speaking of feet, never buy shoes unless you can try them on.

Break some boundaries. Keep some others. Stay in school. Get your degree, but avoid jobs like the plague. Years ago, my mother once said, “Russ, you’ve never had a real job. It’s not that you haven’t worked hard…” Before she could say “But,” I said, “Mom, with any luck, I’ll never have a job.”

I still don’t have one. 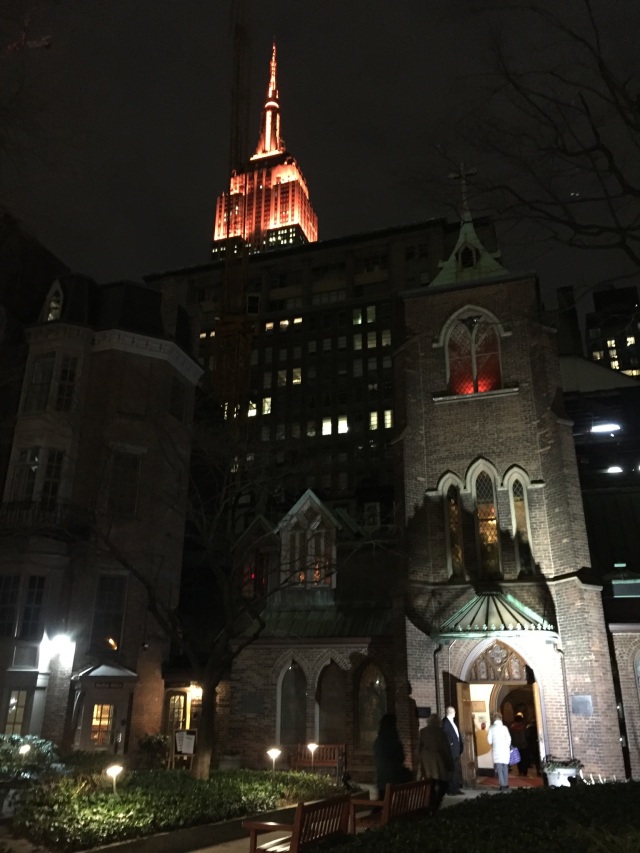 The ESB is nicely decorated at night.

My feet are finally in the water, and I want to keep them there.
View all posts by Russ Wollman →
This entry was posted in Uncategorized and tagged beauty, cats, desperation, dreams, faith, friendship, growth, humanity, India, knowledge, life, loneliness, love, Manhattan, nature, New York, relationships, spirituality, the heart, transportation, whimsy. Bookmark the permalink.